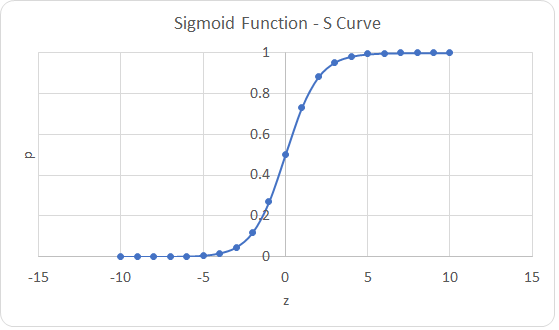 What is Logistic Regression?

When the above business problems are converted to mathematical form, the occurrence of an event is typically labeled as 1, and non-occurrence is labeled as 0.

The logistic regression equation format is shown below:

We will consider a hypothetical data to understand the concept of logistic regression as shown in the table below.
Note: The entire data file named LR_DF.csv can be downloaded from our resources section.

Where is the probability?

The value in the Target column for each row is 0 or 1.
Just imagine, you aggregate the data by Age and compute the percentage of customers responding in each age group, i.e. response probability. The sample table structure to explain the probability calculation is shown below.

The logistic regression is designed to model the relationship between the probability and the independent variable.

Let us know see the mathematical steps to express the below equation in probability form. If we make a plot of p vs z based on logistic function, p= 1/(1+ e^(-z) ), we will get an S-curve as shown in the plot. Because of the s-curve, the logistic function is also a sigmoid function.

The sigmoid function, s-curve has two horizontal asymptotes. Both ends of the s curve is an asymptote.

What is an asymptote?

Business Objective Statement: MyBank wishes to develop a Direct Marketing Channel to sell their loan products to existing deposit account customers. The bank executed a pilot campaign to cross-sell personal loans to its existing customers. A random base of 20000 customers was targeted with an attractive personal loan offer and processing fee waiver. The data of the customers who were targeted and their response to the marketing offer has been provided. The data is in the file (LR_DF.csv) and it can be downloaded from our resources section.

We will use the above business case to explain the concepts of Logistic Regression along with R and Python code in this blog series. The links to various modules of the blog series are given below: