In this blog, we will learn to build a single variable logistic regression using Python and also interpret the model summary output.

MyBank wishes to develop a Direct Marketing Channel to sell their loan products to existing deposit account customers. The bank executed a pilot campaign to cross-sell personal loans to its existing customers. A random base of 20000 customers was targeted with an attractive personal loan offer and processing fee waiver. The data of the customers who were targeted and their response to the marketing offer has been provided. The data is in the file (LR_DF.csv) and it can be downloaded from our resources section.

The sample few records of the campaign data are shown below:

Metadata is data about the data, i.e., it is the description of the data. It is very important to have metadata understanding before jumping into model development.

The next step after metadata understanding is performing a detailed descriptive analysis of each and every variable. We have explained Descriptive Statistics in detail in our Statistics Blog Series. Some of the important links you may wish to read are:

The above coefficients expressed in the logistic regression function would be:

The beta coefficient of SCR is positive, it indicates that the probability (p) has a positive correlation with SCR. 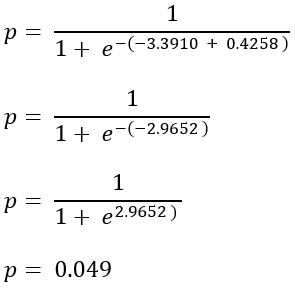