Classification Accuracy is defined as the number of cases correctly classified by a classifier model divided by the total number of cases. It is specifically used to measure the performance of the classifier model built for unbalanced data. Besides Classification Accuracy, other related popular model performance measures are sensitivity, specificity, precision, recall, and auc-roc curve.

To calculate the classification accuracy, you have to predict the class using the machine learning model and compare it with the actual class. The predicted and actual class data is represented in a matrix structure as shown below and it is called Confusion Matrix.

From the above confusion matrix, we observe:

When to use the Classification Accuracy Metric?

The classification accuracy metric should be used only for balanced datasets. Why?

What is Balanced and Unbalanced Dataset in Machine Learning?

In binary classification, if the number of positive samples is (approximately) equal to the negative samples, the dataset is balanced. Otherwise, it is unbalanced.

Assume we are building a machine learning model to predict fraud. The dataset has 99% of the observations as No-Fraud and only 1% Fraud cases. Even without a model, if we classify all cases as No-Fraud, the model classification accuracy would be 99%. In such a scenario, we may preferably use model performance measures like AUC, precision, recall, specificity or F1 Score.

In the dataset, the proportion of Up & Down classes is likely to be 50:50. For such a balanced dataset, we use Classification Accuracy as a model performance measure.

Sensitivity (True Positive Rate): the proportion of actual positives that are correctly identified.
Recall is the other terminology used for Sensitivity.
Sensitivity = Recall = a / (a + b)

Precision: the proportion of true positives out of the total predicted positives.
Precision = a / (a + c)

Let us say, we consider the threshold cut-off to be 0. If the predicted probability is greater than or equal to 0 then Positive else Negative. In this case, all observations will be classified as Positive. The Sensitivity (Recall) of the binary classifier model will be 1 and Specificity will be 0.

On the other extreme, if we consider the threshold cut-off to be 1. If the predicted probability is greater than 1 then Positive else Negative. Probability cannot be more than 1, as such, all the observations will be classified as Negative. The Specificity (True Negative Rate) of the model will be 1 and Sensitivity (True Positive Rate) will be 0.

Sensitivity and Specificity varies between 0 to 1 depending on the cut-off. See the chart below.

Receiver Operating Characteristics (ROC) curve is a plot between Sensitivity (TPR) on the Y-axis and (1 – Specificity) on the X-axis. Shown below is the ROC Curve. The total area of the square in the plot = 1 * 1 = 1.
Area Under Curve (AUC) is the proportion of area below the ROC Curve (blue curve in the graph shown below). 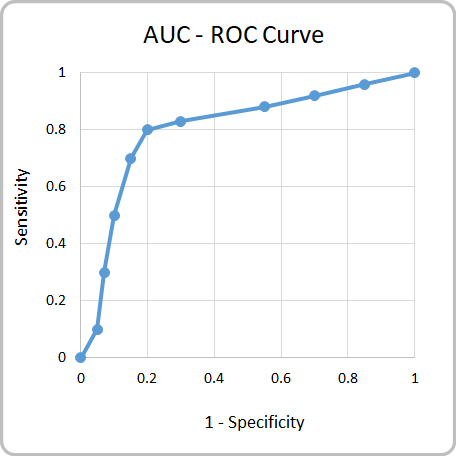 The value of AUC ranges from 0 to 1. The table below explains the interpretation of AUC value. The AUC of the model is 0.70. Based on AUC interpretation, the model may be considered to be a poor or just fair model.

<R Code to be added here>

Related reading – We recommend reading the Wikipedia article on the Confusion Matrix.