Visualization and Pattern Detection is a very important step in Logistic Regression Model development. Visuals create the Wah!!! effect. It helps uncover insights, trends, and patterns from the seemingly huge data by summarizing and pictorially representing the information. The visual insights are very good aid to perform variable transformation and fit a good model on the data.

The featured image shown above is one of the common types of double-axis charts that many analytics working professionals use to see the relationship between the independent variable and the binomial dependent variable (Target Variable). The binomial target variable has only two possible outcomes like Yes/No, 1/0, Respond/Not-Respond, Default/Not-Default, etc.

The primary Y-axis is for the number of customers.

The secondary Y-axis is for the Target Rate (Response Rate).

Insight from the double-axis chart

The insight from the featured image shown above is: “The Response Rate is observed to increase with the number of transactions. The segments having a high number of credit transactions also show relatively higher response rates”.

For a Data Scientist to be successful, it is important to create these charts for all the independent variables and derive insights from them.

The Logistic Regression equation is of the form ln(p / (1-p)) = a + b * x1 where p is the Response Rate (Target Rate) and x1 is the independent variable. The equation is a generalized form of Linear Regression. A scatter plot of Log Odds vs. Independent Variable is prepared to see the linearity. 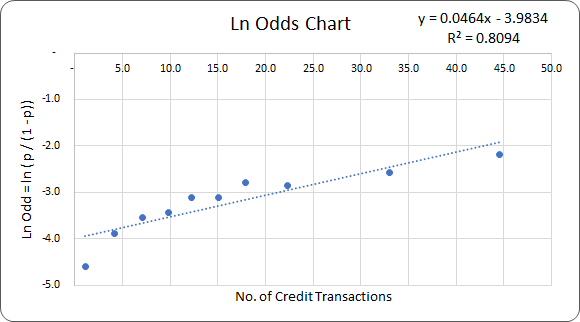 Insight from the Ln-Odds chart

The R-Squared of 0.8 in the above chart shows that there is a very good linear relationship between the independent variable and the log-odds.

You can download the Python code to create the Interactive Double Axis Chart from Github.