Mean, Median, and Mode are the three most common Measures of Central Tendency. They are the commonly used descriptive statistics to describe the data through a single value (central value) that represents the center point of the data. In this blog, we will learn these three very basic but most important statistical measures with practice exercises.

Mean is equal to the sum of all the values divided by the total number of values. 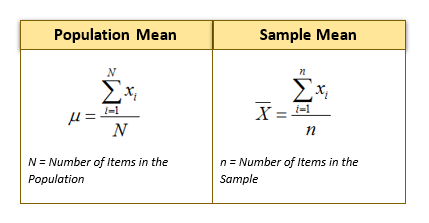 There are 15 Tiny Tots in a preschool and their age in months is given below. Calculate the mean age of the tiny tots.

Interpretation: The average age at which parents send their tiny tots to preschool is around 37 month

A histogram is a commonly used graphical chart to depict numerical variables. The histogram plot of the age of the Tiny Tots is shown below: 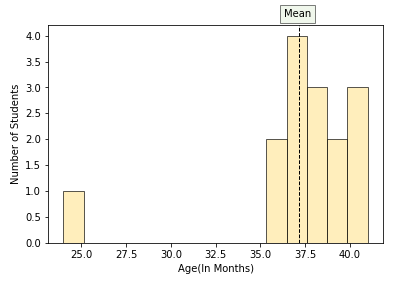 From the histogram plot, we can observe that:

Box-plot (a.k.a box and whisker diagram) is a very commonly used plot to find outliers in data.

From the box-plot, we can observe that the age value 24 is an outlier.

The mean statistic is impacted by the outlier. When there are outlier values, in most scenarios we remove the extreme values, i.e., trim the data and then compute the mean. Alternatively, we use the median as the measure of central tendency.

NOTE: Sometimes despite having extreme outlier values, we compute the mean without outlier treatment and give importance to Mean statistic over Median.

Let us remove 5% of the highest and lowest value from the below data. 5% trimming from 15 values is removing 0.75 observations, i.e. 1 observation from both the extremes. The sorted data is shown below:

The histogram and box-plot of trimmed data are shown below and it can be observed that there is no outlier.

In a simple mean, we give equal weight to each value. However, there may be instances where we may have to give some more weight to certain observations than others in computing the mean and it is called Weighted Mean. In weighted mean, the value is associated with some weight based on significance, importance, or occurrence frequency. The Weighted mean is calculated as. 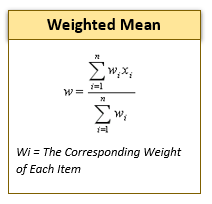 Example
There sample data of 15 Tiny Tots could have been shown as below. To compute the mean age we will have to give weight to the frequency of occurrence of each age value and the mean so computed is weighted mean

There are 15 tiny tots in a preschool and their age in months is given below. Calculate median:

50% of the tiny tots in preschool are below the age of 38 months and the remaining 50% are above 38 months.

Median represents the value of the central observation in a given sample. From the above table, we cannot compute the median of all three preschools together. To be able to compute the median we will require the age at individual children level.

Mean is computed as the arithmetic average of the values in a sample data. From the above table, We can compute the mean of all three preschools together using Weight Mean calculation but not Median. Dear blog reader, I leave the calculation as a practice for you.

What is the rate of interest for the overall Rs. 50 Lakh?

A small startup has 10 employees including the founders. The monthly salaries of all the employees are given in the table below:

Compute median from the below histogram. 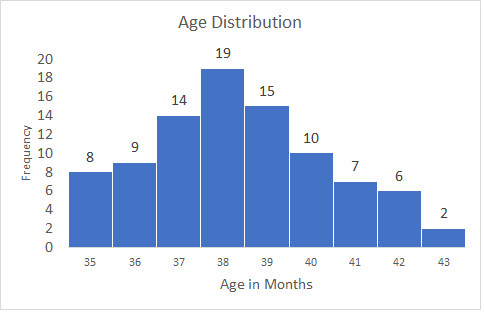 A small startup has 10 employees including the founders. The monthly salaries of all the employees is given in the table below. Find the median salary.