From the above e.g., we can say “Monthly Household Income” is the independent variable.

Assume, you have surveyed 500 households and collected their Monthly Income & Monthly Expense details. You wish to find a mathematical relationship between Expense and Income. The statistical technique used to analyze such data is the Regression technique. The most commonly used regression technique is Linear Regression.

Mathematically, the equation defining the Linear Regression is:

To explain the concept of Linear Regression, we will use household survey data having Monthly Income and Monthly Expense details of the households. The table below shows a few sample records of the survey. Click here to download the survey data from our Resources section. Scatter Plot: The plot below shows the distribution of the Monthly Household Income vs. Expense. 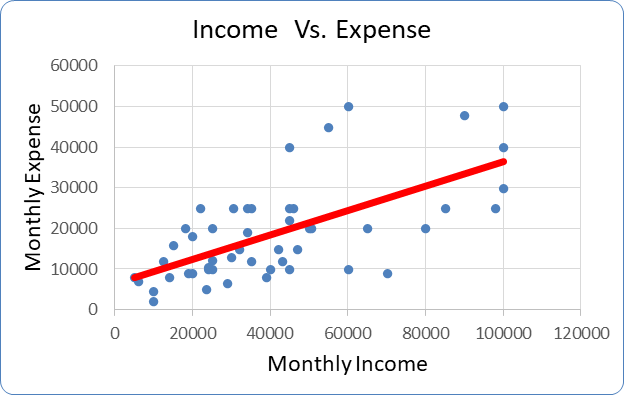 A line of best fit is a straight line that best fits the data on a scatter plot when the relationship between the dependent and independent variables is linear.

In the image shown below, we can have millions of straight lines on the scatter plot. The question is: Which line will be the Line of Best Fit? What is the Sum of Squared Error?

Error is the difference between the Actual and Estimated value:  e = y – ŷ
Squared Error is simply the square of the error term, i.e. (y – ŷ)^2
Sum of Squared Error (SSE) is the summation of the squared error term taken across all data points

Continue reading our next blog to build the Linear Regression Model in Python and R.