In this blog, we will understand the concept of standard deviation and variance.

The concept of variance has a central role in statistics because it is used to calculate other statistics like ANOVA, R-Squared, hypothesis testing, statistical inference, and more.

A hospital has 100 bed facility. The day-wise demand for beds in the month of Jan 2020 is given below. If there is more demand on any particular day, the hospital will have to refer the patient to some other hospital.

The mean for the above data is 100.
Given, the hospital has 100 bed facility. Does it imply the hospital will be able to serve all the patients?

No, because the demand is sometimes more than the available number of beds.

Calculate Variance – Variance is the square of standard deviation. The variance for the above data will be 24.5 * 24.5 = 600. It cannot be directly compared with mean value as such, variance is less intuitive.

An exceedingly high standard deviation in demand suggests that:

We will now take another example to explain the calculations of standard deviation. Calculate the standard deviation for the sample age data of the 15 students from Data Science Certification Program as given below. 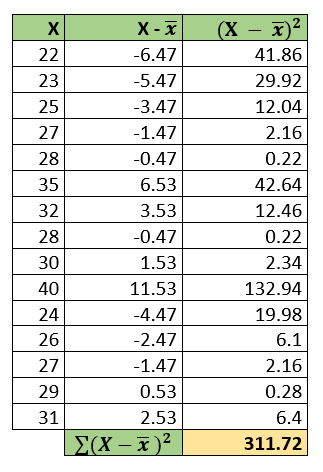 If you note the bracket term in the formula of standard deviation, it is (x – x̅). We are calculating the difference of each observation from the mean. As such, we can interpret the value of 4.72 as the average deviation between the individual observations and mean.

The Standard Deviation of Engineering Students data given below is 0.83

The above example leads us to another important statistical measure of dispersion – Coefficient of Variation (COV). It is a measure of relative variability. CoV is calculated as the ratio of standard deviation (SD) to mean. CoV does not have any unit as it is a ratio of SD to mean.

Assume, you are working as a data scientist. You are analyzing the data of Retail Customers. Between the two variables Age and Spend, you have to decide which variable has more variability.

From the absolute value of standard deviation, you cannot say whether Age has more variability or Spend. This is because the two variables have different units. Age is in Years and Spend is in Rs.

Assume the Age information is given to you in days. Then the standard deviation of age would be 6 * 365 = 2190 days instead of 6 years. So to be able to compare the two variables we will have to compute the Coefficient of Variation.

As CoV of Spend is less than Age, we conclude that the variance in Age is more than Spend.

For the above hospital bed example calculate the following:

A small start-up has 10 employees including the founders. The monthly salaries of all the employees are given in the table below:

We will discuss Measure of Relationship – Covariance and Correlation.